Five Reasons to Go to Spain in Spring 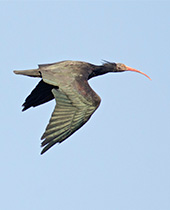 In April of 2016 I headed to Spain for two weeks to lead Quest Nature Tours' Spain in Spring trip. The trip was timed perfectly - the last two weeks of April - meaning that we explored Spain during the height of spring. Bird migration was in full swing, and the plains were alive with a carpet of wildflowers and displaying bustards. We watched the raptor migration across the legendary Straits of Gibraltar, experienced the masses of shorebirds, warblers and other wildlife at Parque Nacional de Doñana, watched a variety of nesting raptors, including the endemic Spanish Imperial Eagle at Parque Nacional Monfrague, found a nice selection of snakes and lizards, and explored the scenic vistas of the Pyrenees, complete with its own suite of special environments and species that call it home.

Of course there were moments throughout to experience Spanish culture and learn a little bit of Spain's history, and our local guide, Sofia was engaging, knowledgeable, and eager to share her country with us. The food and drink in Spain was certainly one of the highlights of the trip for me, the hotels were excellent, and everything went off without a hitch. 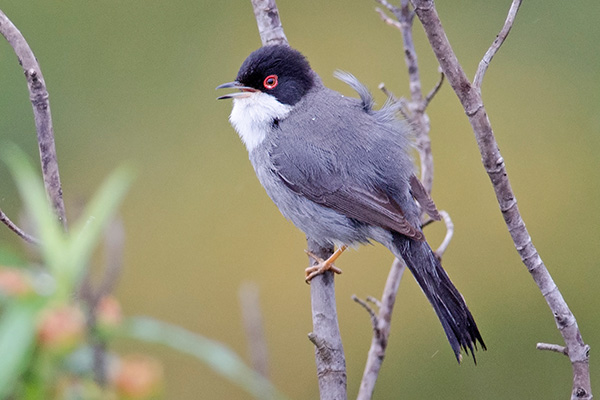 Sardinian Warbler
In April of 2020 I am heading back to Spain with Quest Nature Tours. The dates of the tour are April 16 - 29, 2020, and we will be following a similar itinerary to the 2016 tour. If you have interest in visiting Spain in the spring, and are willing to put up with me as your guide, then I encourage you to view the tour here.

Below are five of the reasons why I can't wait to get back to Spain next April.

1. Dancing bustards in the Steppe

Steppe is a type of habitat that consists of wide open grasslands and few trees, apart from near watercourses. The Zaragoza area of Spain has a large area of steppe, and while this ecosystem can seem dry and barren for much of the year, in spring the rains rujuvenate the soil which prompts a carpet of colorful wildflowers to appear. The steppe is the preferred habitat for two species of bustard. Filling a similar niche to the prairie-chickens and grouse of the American prairies, bustards are large, terrestrial birds that perform an elaborate courtship. The Great Bustard, in particular, provides quite a show. Males will gather in a lek (a 'court'), each displaying to try to win over a female who is watching over the proceedings. He will puff out his throat, tuck his head into his white chest and completely puff out his plumage until he resembles an oversized cotton ball. Sometimes the males will strut around like this for several minutes at a time. 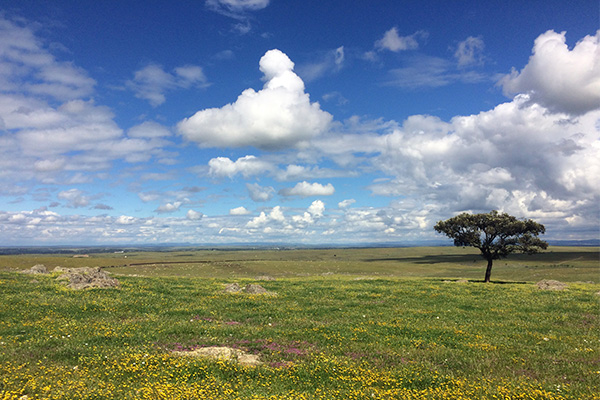 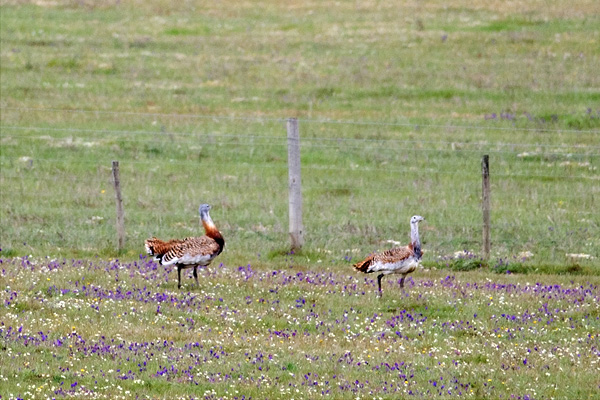 Great Bustards
Not to be outdone, Little Bustards can also be found displaying in the same areas. In addition, we will be keeping our eyes open for Lesser Kestrels, Black-bellied Sandgrouse, European Rollers and several species of shrikes while we explore the steppe of central Spain. 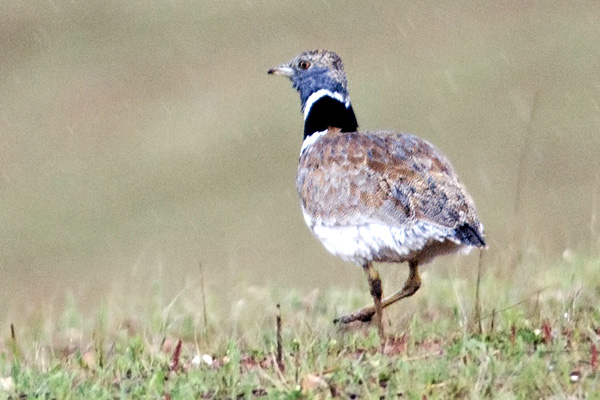 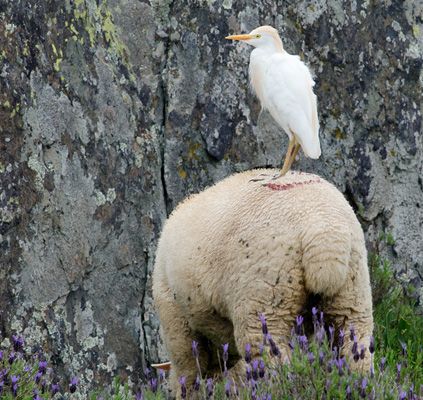 Cattle Egret
2. The pine forests and marshes of Donaña, where the Iberian Lynx still roams

Parque Nacional de Donana is said to be one of the most diverse national parks in southern Europe. It is of particular importance as a stopover site for many species of birds, as well as a location where Iberian Lynx can still roam. While sightings of Lynx are still very rare, we will be in the right habitat and will keep our eyes out! In 2016 Parque Nacional Doñana gave us many special moments, including gorgeous Iberian Magpies at eye-level, many species of migrant warbler, a nice diversity of lizards and other herptiles (reptiles and amphibians), and a diverse soundtrack of various treefrogs and toads each evening from our hotel located right next in the park. 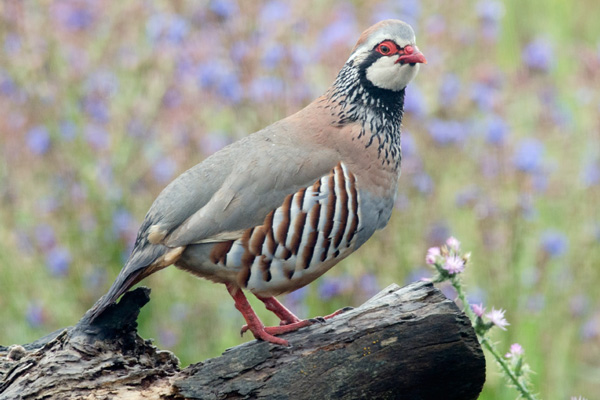 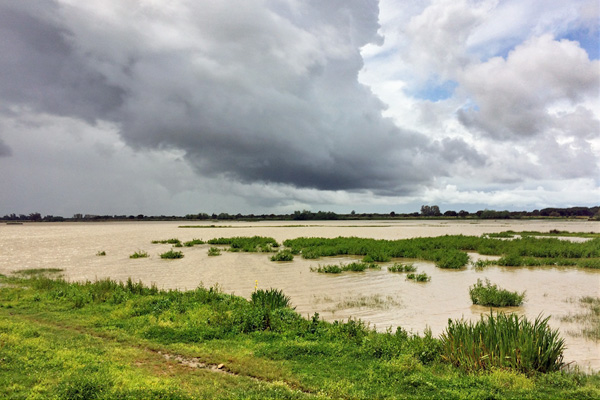 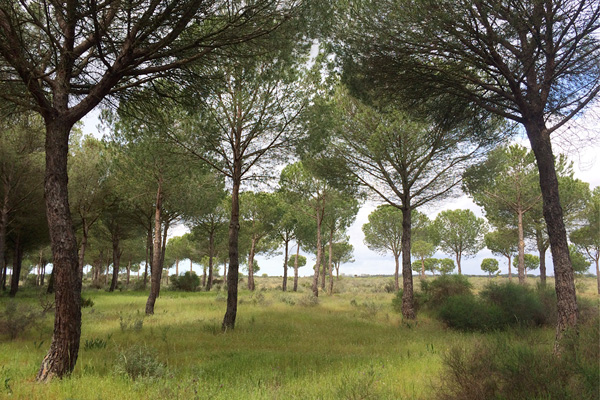 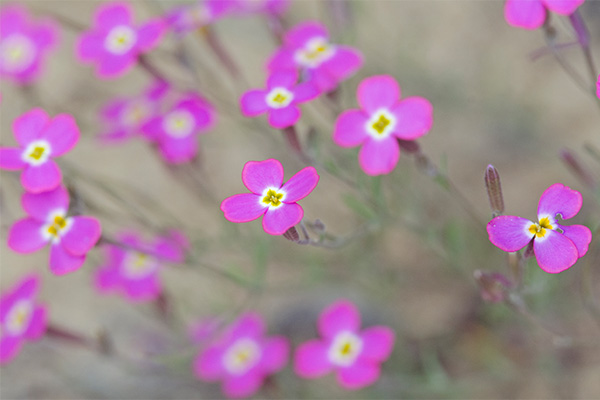 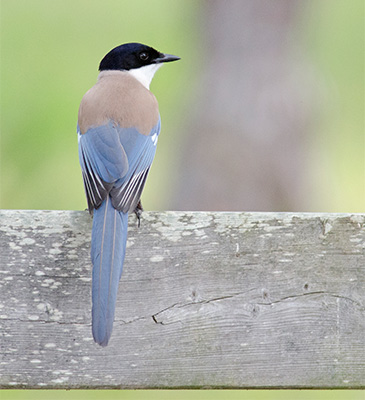 Iberian Magpie
3. "Out of Africa"; the spring migration of birds into Spain

Our trip will be timed perfectly to experience the wonder of spring migration. If the conditions line up properly, the raptor migration across the Straits of Gibraltar can be excellent, which we will view near Tarifa. This narrowing of the Mediterranean Sea causes many species to direct their northbound migration through this area and tens of thousands of raptors pass through each spring. 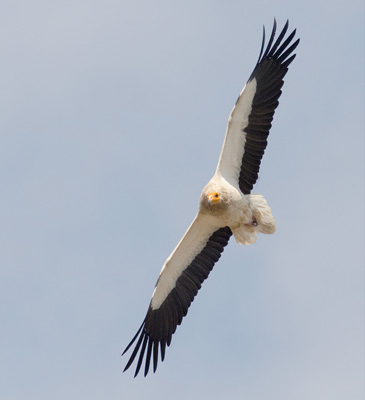 Egyptian Vulture
Additionally, the wetlands and woods will be full with migrant species returning for the summer, or passing through on their way to climes further north. Late April in Spain is similar to mid-May in Ontario, in which many species are on the move. European Bee-eaters and European Rollers are two favorites of mine that will be back on territory during our tour. 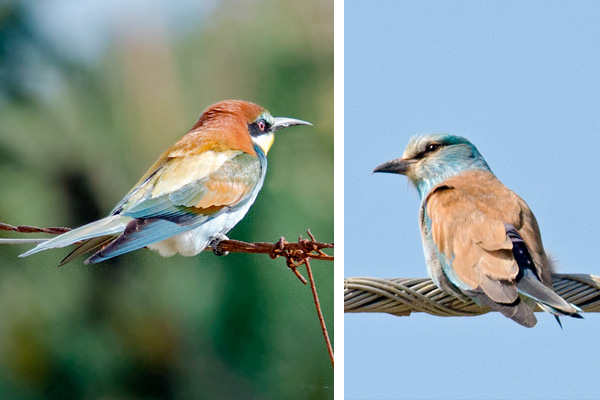 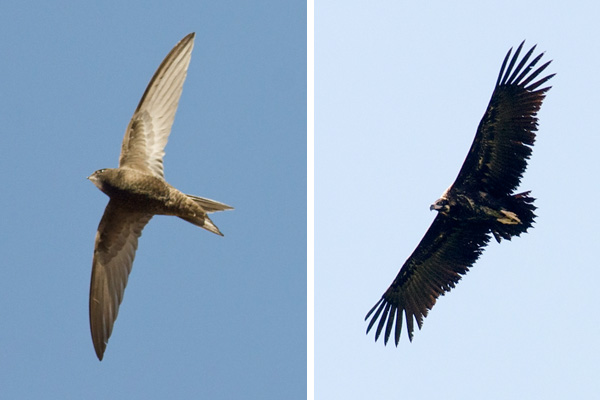 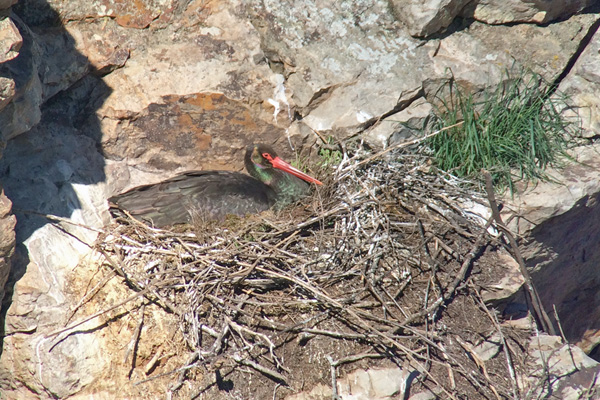 Spain has a wide diversity of ecosystems that provide habitat to many reptiles and amphibians, but most people would be surprised to hear that over 85 species of reptiles inhabit Spain (as do over 30 amphibian species). Lizards are especially diverse and in recent years many new species have been named following taxonomic "splits", whereby scientists decide that what once constituted one species actually constitutes two or more species. Late April is a perfect time to visit Spain as most species are active during that time, and I expect that we will see a nice diversity of lizards. I am always on the lookout for snakes when travelling and hopefully we will be able to find a few in 2020! 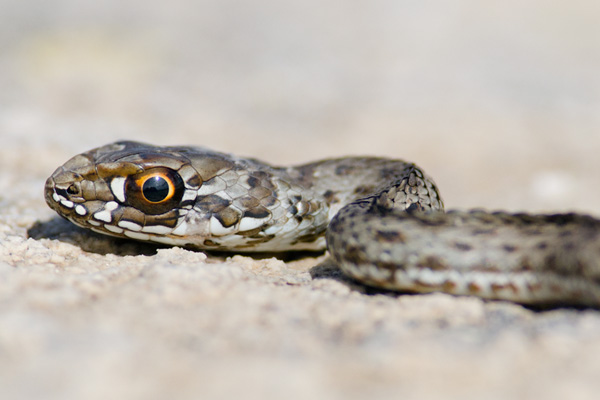 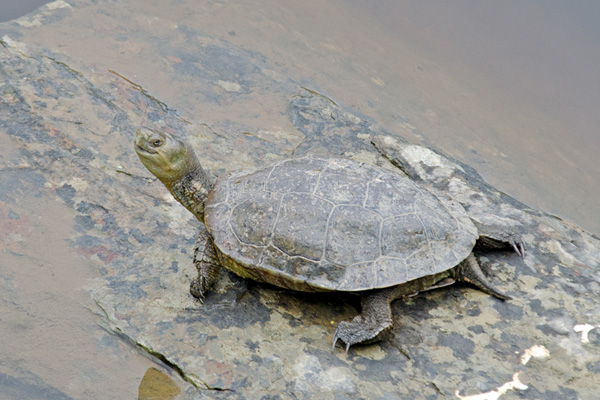 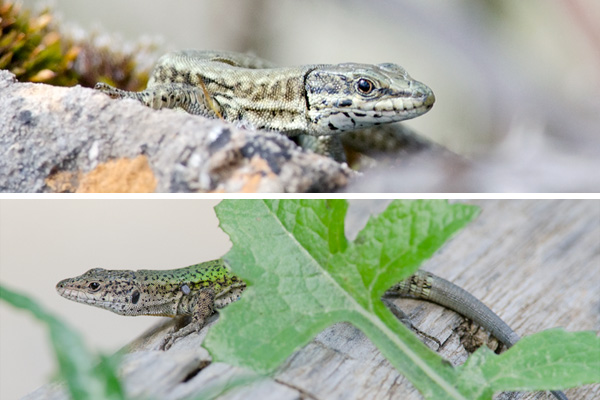 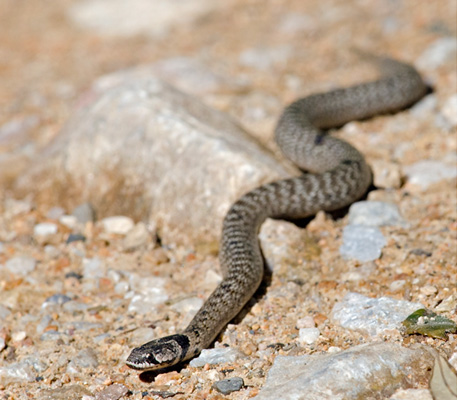 I've saved my favourite for last. Near the end of our trip, we will explore the Spanish Pyrenees for a few days, where we will hike among ancient beech forests where Black Woodpeckers can be found, and beside rushing, ice-cold streams home to the peculiar White-throated Dipper, a songbird that dives into the current to fetch invertebrate prey. 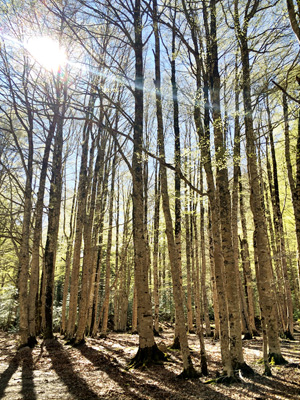 Beech forests of the Spanish Pyrenees 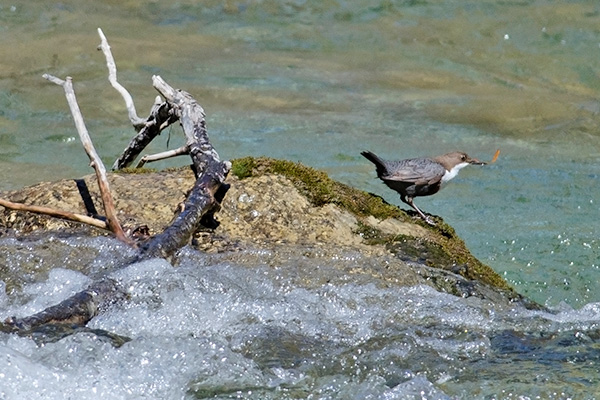 White-throated Dipper
One of the most spectacular inhabitants of the Pyrenees is the Lammergeier, also known as the Bearded Vulture, or the Quebrantahuesos in Spanish (translating to "breaker of bones"). Lammergeiers are denizens of the high peaks of the Pyrenees. They cruise high in the sky, using their excellent vision to search for the bones of mammals. Lammergeiers will pick up particularly large bones and drop them onto a hard surface from high in the sky, in order to crack open the bones and make the marrow accessible. While Bearded Vultures will occasionally take other prey items, they are the only bird species that specializes on feeding on bone marrow, which constitutes roughly 70-80% of their diet. In 2016 we had an incredible experience with half a dozen Lammergeiers, and I can't wait to experience that again. 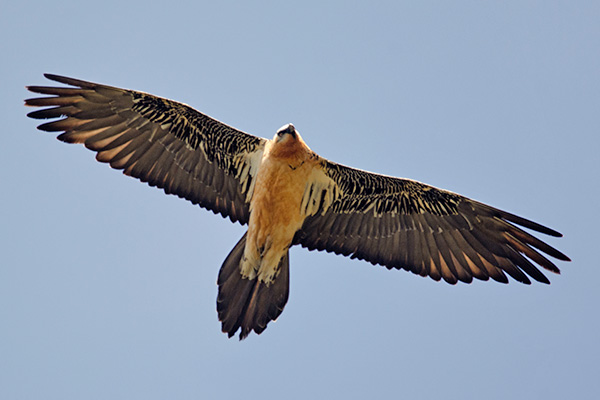 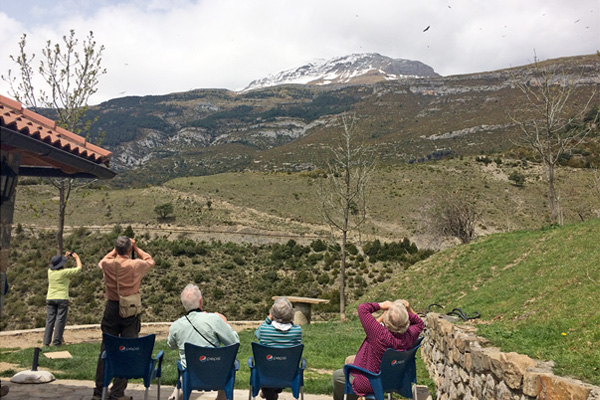 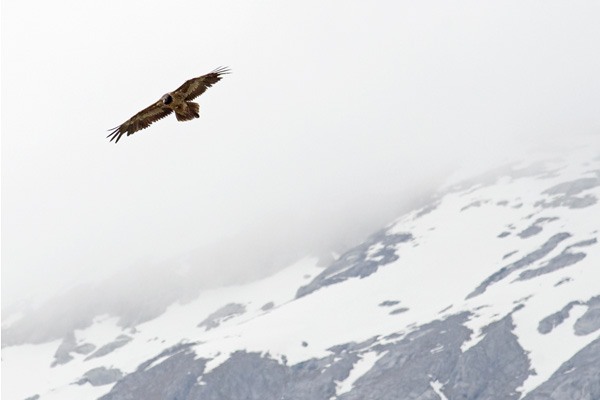