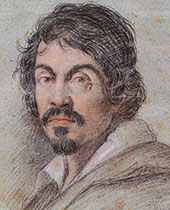 Narcissus, a hunter from Boeotia well known for his beauty, set off hunting one day. He stopped by a stream to quench his thirst, leaning over the water and in so doing, saw his own handsome face reflected. He fell in love with his own reflection and after realizing that his love could not be reciprocated, died of his passion. Caravaggio’s painting depicts Narcissus gazing upon his own distorted reflection with an air of brooding melancholy. The figure is surrounded by darkness, creating a self-regarding loop. Here we see both the classical perfection of the Renaissance and the early experiments with extreme shadow and dramatic, emotional presentation that would characterize the Baroque. The work showcases Caravaggio’s use of chiaroscuro, the contract between very dark and very bright spaces in a painting. 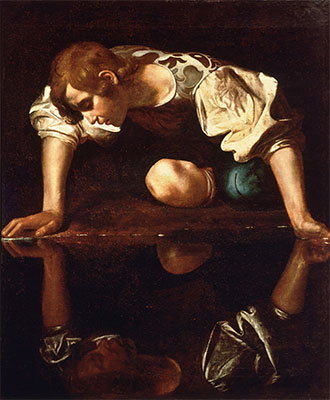 Narcissus by Caravaggio
Medusa was one of the ugliest creatures of Greek mythology. She was a monster, a winged female with living venomous snakes in place of hair and a horrifying visage. Her superpower? Turning anyone who looked upon her into stone. Caravaggio painted two versions of Medusa, one in 1596 now in a private collection and the other around 1597 now in the Uffizi Gallery. He modelled himself for Medusa’s face, depicting her conscious despite her severed head. The contrast of life and death is transmitted by Medusa’s intense expression. The painting was heralded for its technical achievement in making a convex surface appear concave. It is a penetrating portrayal of a final moment of consciousness and a meditation on mortality of unprecedented vitality. 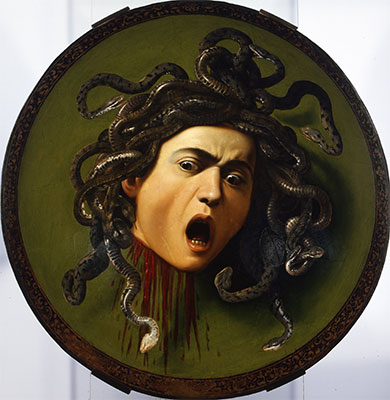 Medusa by Caravaggio
We’ll be studying Caravaggio as the first modern artist on our intensive Classical Pursuits trip to Rome and Malta in May 2022. Don’t miss this!
Full Webinar Library