Mystery in the Sea of Galilee 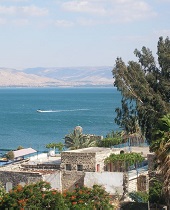 A giant "monumental" stone structure discovered beneath the waters of the Sea of Galilee in Israel has archaeologists puzzled as to its purpose and even how long ago it was built.

The mysterious structure is cone shaped, made of "unhewn basalt cobbles and boulders," and weighs an estimated 60,000 tons the researchers said. That makes it heavier than most modern-day warships.

They say it is definitely human-made and probably was built on land, only later to be covered by the Sea of Galilee as the water level rose.
On Day 5 of our  tour to Israel and Jordan we will ponder this discovery as we take a boat trip on the boat of Galilee.
FULL WEBINAR LIBRARY