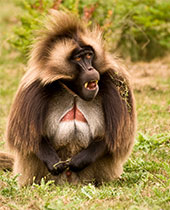 Africa’s Great Rift Valley is a hotbed of paleontology, with so many answers about the origins of humanity having been excavated from its ancient soil over the years. Atop the soil, there roams a primate that represents the final species remaining from the previously diverse genus of Theropithecus that once comprised several grazing species across Africa and parts of India. Not only is the hearty Gelada the lone survivor of Theropithecus; it is also confined solely within Ethiopia’s borders. 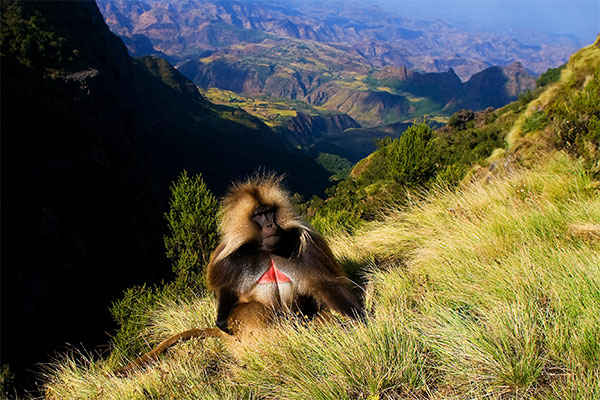 A day in the life of a Gelada seems precarious – sleeping by night on cliff ledges, before ascending to plateaus to forage by day – but it’s a recipe for survival that has allowed the Gelada to persist. Geladas are typically encountered in large groups, with each individual hunched over in an alpine meadow picking away at grasses. This is the best chance to see and photograph the hourglass-shaped patch of pinkish-red skin on the upper chest that gives these remarkable creatures their colloquial name of “bleeding heart monkey.”

Join us this October in pursuit of Geladas and other treasures of the Great Rift Valley in Ethiopia: Bone-breakers, Bleeding Hearts and More, October 14 - 29, 2016.
Webinar Library